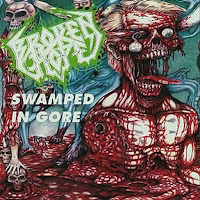 After the appearence of Cannibal Corpse slowly more and more gory bands were formed. Broken Hope was known about their brutally low vocal style, which was one of the lowest ones in the genre, and their limitless grinding music.
While the late albums tried to exceed the limits of the previous ones in brutality, "Swamped in Gore" had a contrast with mid speed groovy themes, which ended up with such intensity that could fit even into grindcore. That often changing speed and style made it probably their most diversive album, and the incredibly deep and wretched growlings turned the main picture so rude as possible. Like some frequent continuous pressure that always wants to disturb the listener's peace and keep haunting to return with the most absurd, and gruesomely sick lyrical topics. This kind of insanity fits perfectly in one line with Cannibal Corpse, Autopsy and Pungent Stench. Even if "Swamped in Gore" didn't exceed most of other death metal albums in main intensity that time, with it's exaggerated style and brutal sounding it surely exceeded them.
Posted by Personal Warlock at 7:17 PM