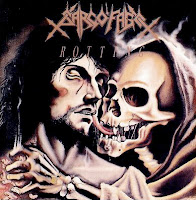 After Sepultura, probably Sarcófago had the strongest influence on the South American metal scene. But while Sepultura played later more acceptable music for the ears of the generic metal fans and became famous, Sarcófago kept it's exaggerated style and stayed underground.
They always tried to show something new on their albums, a different aspect of extremity, by balancing on the border of thrash, black and death metal. The rate of these features was mostly changing, as it's possible to say that now about a past time period, when the differences between these styles were not really distinguished yet. Their music had maybe the darkest possible tone with the maximum level of insanity on the "Rotting" EP. "I.N.R.I." was already a big hit in their quest to create the most aggressive music ever, but they probably reached their goal by "Rotting". The intensiveness of this record was remarkable and formed the coldest and most cruel musical atmosphere, where it's folly to look for catchy melodies to guide. Chaos and insanity awaits here to cast down the listener into the darkest depths.
Posted by Personal Warlock at 9:06 PM