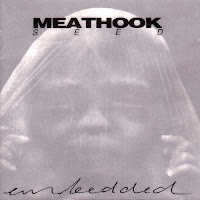 If industrial was mixed already with rock/metal music, why not try to mix that with death metal? Meathook Seed was a project by Mitch Harris from Napalm Death, and in two Obituary members (Donald Tardy and Trevor Peres) he found companions for his musical experiment.
In general the death metal features couldn't be completely distinguished from ordinary metal features that could be found in industrial metal in general, but "Embedded" is far more guitar centric than other albums in this style. The repetitive themes aren't so simple either, and showing larger diversity. Since the drums aren't completely programmed either, the industrial influences are not only represented by the overweight of electronic music features, like in most similar projects. It's like they tried to approach things by the song structure first of all. The industrial influences are there only to amplify the basic metal themes, but as the album goes on, their role is increasing. The vocals are occasionly similar to hardcore shouting, but mostly they are artificially distorted. So by this approach: the difference between the unusual mix of these two quite distant genres and simple industrial metal based on diverstity both in themes and lyrics, and on a more balanced mixture of the two styles. And of course that leads to a heavier impression. While similar tryings are rarely successful and resulting something that's not really possible to enjoy, Meathook Seed succeeded and created something genuine. And interesting and unusual experiment for sure!

Posted by Personal Warlock at 11:59 PM