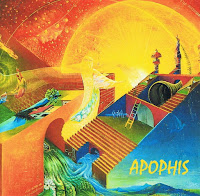 Apophis stood out from the endless mass of death metal bands with their original approach, concept and style. Similar to most smaller and forgotten German bands, they experimented with something uncommon.
They were the first band who involved Egyptian mythology into their lyrical concept (on the side of dark and occult topics of course), but that doesn't had any influence on their music. Musically they were genuine too, but in another way independent from the main concept. Their music was like a mix of melodic, raw and more complex themes. Not so catchy for a first impression, but sounds stunning and couldn't be really compared to anything else in the '90s old school death metal scene. It may be hard to decide if that was only the result of direct complexity and "Gateway to the Underworld" is a genuine concept album, or the marks of the band's early raw experimenting ambitions had main role at the outcomes. However it's a quite diverse album with a colorful musical view, and also counts as an interesting old school classic of the genre.
Posted by Personal Warlock at 10:43 PM