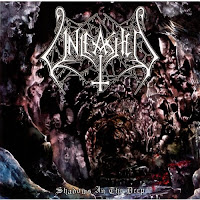 As one of the elite bands of the Swedish death metal scene, Unleashed represented a very intense way with their music, and in lyrical topics a more traditional way.
While Anti-Christianity and raw, primitive themes were usual in that scene, the bigger bands had different focus about these parameters and mostly that fixed their style. This may not sound much, but it's important to mention that diversity wasn't a common feature in old school Swedish death, and just like in the Scandinavian extreme scene in general, the borders were quite tight. The local bands were determined to orientate to a specific style, and it seemed like reasonable differences and experimentings were not really welcome unless it was about a complete style change. Anyway Unleashed focused on fast hammering, and their themes were less raw what the other local bands played. In lyrical topics on the side of Anti-Christianity they preferred mythological and viking topics, which was kind of particulal before the folk- and pagan metal wave. "Shadows in The Deep" just continued the path of "Where No Life Dwells", which albums were probably the best works of the band.
Posted by Personal Warlock at 8:07 PM