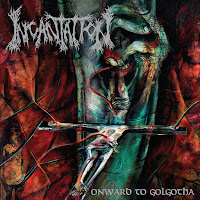 Incantation always represented a very raw exaggerated direction in death metal, and their heaviest album was probably their debut. "Onward to Golgotha" became a classic quite soon because of it's mass brutality which showed a new aspect how to play so heavy music which is hard to imagine to listen after sunday's dinner for chilling.
The album is like summary of various features of extreme music. Fast, complex and intense like brutal death, the same time slows down very often to extend the themes and increase their heaviness at a doom metal level. And lyrically definitely determined about blasphemous, occult and anti-religious topics. Very deep growling vocals assisting as narratives, and the result is a so blob-like noisy music that reminds to the atmospheric concept of ordinary black metal. The difference is that in this case it happends by instruments that could be clearly heard, so good quality sound turns into noise. The effect is the opposite. While simple sizzle can create a depressive and catchy atmosphere, complex themes with clear sounding creating nerve wrecking heaviness. The fact that melodies are so rare in their music like praising Christianity in their lyrics, also a feature that may block their way into any popularity contest. An imporant classic of the genre!
Posted by Personal Warlock at 5:31 PM