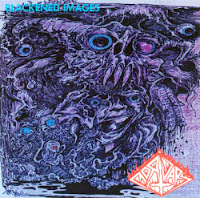 The extreme music wave had no boundaries, excellent bands appeared from various of locations. Mortuary is one of the plenty underrated bands who left behind some awesome feeling by their music.
"Blackened Images" could define well what old school death metal means. A very intense thrash influenced album that operates with killer speed hammering, effective occasional changes and catchy themes. A very raw record which takes advantage through it's rude and primitive style. That primitiveness gave the feeling that makes the album so effective. It's the starting push of a young band who wanted to show some impressive musical brutality. It sounds very putrid and noisy, which is probably the result of their low budget and poor recording circumstances, but this is exaclty that adds a lot to it's overwhelming feeling. Even the occasional weird moments are strenghtening their effectiveness. "Blackened Images" counts as a masterpiece in it's raw and rude style.
Posted by Personal Warlock at 10:09 PM