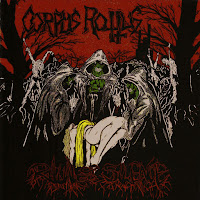 The line of one album underground bands of the early '90s may seem endless, and it includes dozens of underrated bands which were worthy for more attention than what they had in their times.
"Rituals of Silence" by Corpus Rottus could be a really enjoyable record for the fans of old school sounding death metal. It includes everything why this style could be liked. Intense, massive thrash influenced hammering, diverse and awesome themes, noisy, heavy aggressiveness. The sound of their short and wild solos reminding to Massacre, but they had their own style in general. No signs of any amateur experimenting or path searching ambitions, it was a short, but quite stunning abum for a start. Their pure, wild music wasn't on a lower level at any aspects than any of it's coetaneouses made by the "death metal elite". In the very depths of underground "Rituals of Silence" still counts as an everlasting classic amongst the plenty of it's forgotten bloodthirsty companions from the golden age of death metal.
Posted by Personal Warlock at 8:09 PM