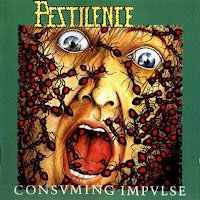 Pestilence had a remarkable influence on the European death metal scene. They were the first band in Europe who gained wide international success in this style.
After the raw and very intense "Malleus Maleficarum", their second album, the "Consuming Impulse" gave them this success. Their music became mature, by cleaner themes, and much better, more aggressive sounding. Thanks to their contract with Roadrunner Records, they could record their albums in the US, so they were the first in excellent sounding quality as well on the continent. Their lyrics were much diverse, than at most bands. It was like a selection of various tormenting and destructive aspects of life. The suffocating vocals of Martin van Drunen describing them dramatically. The classical horror based topics were never usual at them. Musically they were diverse too, they always tryied to show something new, but probably "Consuming Impulse" was their most important album. An everlasting classic of the genre.
Posted by Personal Warlock at 6:52 PM