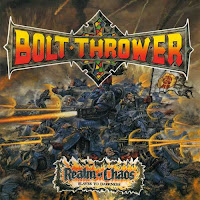 War is a frequently returning topic in death metal. In the case of Bolt Thrower - which is one of the earliest British death metal bands - it's the only possible topic, and they seem like interested in any kind of war.
And in the case of "Realm of Chaos" probably the fantasy/science fiction world of Warhammer 40K was the most inspiring. Bolt Thrower have a typical flat sounding which became their main feature, and it's also usual at other old school British death metal bands. Even though it's extreme music, this sound could somehow turn powerless even the wildest hammering, and kills all passion from the listener for any possible destructive behaviour. Like some sort of passive aggression. Always a middle speed was usual at the band, but no matter how diverse or brutally good they played, they mainly just sounded like the same. "Realm of Chaos" is one of those albums which may be an exception, where this incontrovertible law was weaker. The heavy, oppressive feeling they were into, prevails on "Realm of Chaos" the most.
Posted by Personal Warlock at 9:52 PM