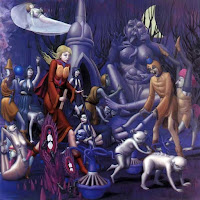 The birth of basic classics are not counting as everyday's events, but if that happends in a genre which exists already since more than a decade, is kind of unparalleled. Cathedral was more known lately about their stoner/doom style, but their debut upgraded the sound of doom metal.
Something far heavier and darker appeared with "Forest of Equilibrium", that included still the feeling of the Black Sabbath, Pentagram, Candlemass line, but it was more effective. The '70s hard rock feeling was still there in plenty of themes, but a new distorted, heavy sound was in focus, that opened a new possible way for the genre. Clear singing wasn't dominant anymore, quite desperate sounding vocals are the narratives instead, not endeavouring to sing correctly, but collapsing or becoming harsh at the first possible occasion. Like wavering between changing moods and struggling with some inner pain that follows. Strongly reminding sometimes to the gothic, post-punk vocal style of the '80s. The guitar themes are catchy and creating a genuine melancholic atmosphere. The result is a sickly depressive feeling that pulls down the listener into newer depths of dark anxiety. A doom metal masterpiece!
Posted by Personal Warlock at 9:46 PM