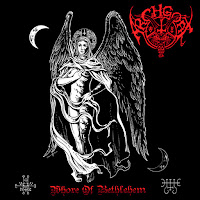 Archgoat counts as one of the earliest bands in the black metal scene, but after a few demos and an EP they have vanished. After a long break they have returned to play the same devastating black/death brutality, but this time even more intense and with better sound quality.
"Whore of Bethlehem", their first full-lenght album cannot disappoint the fans of the style. It's exaggerated all-round, represents the most obscure and inhuman aspects in extreme metal. There's not a calm moment to find in this pure blasphemic mass of musickness. It's never ending hammering dictates intense speed for the brutality that excludes all possibilities for any kind of melody to appear or atmosphere to take a role. The vocal sounds like the fading growling voice of some monster from a desolated crypt. For the insanely aggressive effect the intensity of the music is mainly responsible. This high speed and simple, but very precise drumming style isn't new in this style, but Archgoat was able somehow to push the borders further and to create something that was impressing even for the most obsessed fans. By this step the band made "Whore of Bethlehem" to take place on the side of the most exaggerated black/death metal albums.
Posted by Personal Warlock at 10:41 PM